The Importance of Choosing Your Facelift Surgeon

It is always important to choose wisely when picking a plastic surgeon, but the stakes are higher when considering a facelift. Your face is the first feature anyone notices about you, and it is always on display. You cannot hide or cover a bad facelift. Your choices are to learn to live with it or […]

How to Achieve Natural Facelift Results

Patients undergo facelift surgery in hopes of removing visible aging from the middle and lower regions of the face. When a facelift is performed by a talented and experienced plastic surgeon, the results can be quite remarkable, yet very natural. Unfortunately, it is not uncommon to see some people in public with tell-tale signs of […]

Top-Rated Facelift Surgeon in Los Angeles Cosmetic Town, an online platform that focuses on cosmetic medicine and serves as an educational resource for potential patients, uses strict criteria to determine which plastic surgeon is the best facelift doctor in Los Angeles. Some of the guidelines used when gathering qualitative data for this award are: Meticulous […]

Beware of the Facelift Shortcut

Minimally invasive facelifts have become a trend in recent years. More and more patients are turning to what has become known as a “weekend lift” to address their unwanted facial laxity. These mini lifts are advertised as being alternatives to traditional facelift surgery for patients who may require a lesser degree of correction. The weekend […]

Many people are discovering that something can be done about the gradual loss of a triangular-shaped, youthful facial appearance, and the morphing into an older, square-shaped face. Dr. Boris Ackerman a Newport Beach plastic surgeon specializing in facial plastic surgery is one of the plastic surgery specialists in the country adept at performing a procedure […]

All The Benefits of a Face Lift Surgery Without the Surgery

Dr. Boris Ackerman a Newport Beach Ca Plastic Surgeon says the liquid facelift procedure is on the rise.  A liquid facelift is a process that provides many of the same benefits of a surgical face lift, without actually undergoing any kind of surgery. It is referred to as a ‘liquid’ face lift because materials such […]

Doctor Ackerman a Newport Beach plastic surgeon that specializes in facial procedures is reporting that the mini-facelift surgery is one of the most sought after procedure he is performing at his Newport Beach Plastic Surgery Center. Chief among the advantages of this procedure is the fact that it is minimally invasive, and requires only a […]

Recent Study Regarding Rhinoplasty Satisfaction For Men Lower than Women

The Daddy Makeover on the Rise 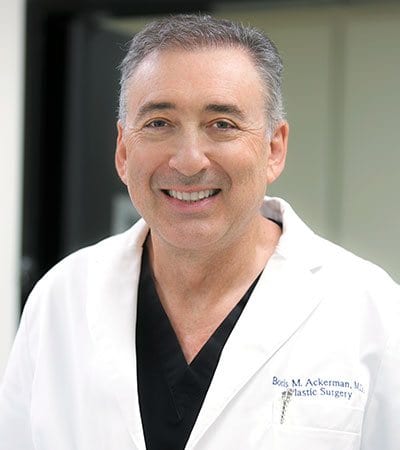 Boris M. Ackerman, MD
Over 30 Years of Experience
Over 800 Expert Answers on RealSelf